When I started to work on the capsize problem I had no doubt that it would be possible, in the modern world, to provide equipment to bring a well found yacht through a storm like the Fastnet or the Sydney Hobart. Water is a familiar fluid. Wave speeds and heights are well within engineering experience. Any competent Aerospace company has handled problems much more challenging. …

The shape and motion of storm waves when viewed from the deck of a yacht are such that it can lead to optical illusions which confuse the skipper. A large storm wave approaching the boat appears to be a dangerous wall of water and the skippers instinctively tend to head up (= anluven) or run off to avoid being pooped (= von hinten durch eine Sturzwelle getroffen werden). Actually the water in the wave is not moving towards the boat and will lift the boat harmlessly.

From physical considerations it is virtually (= geradezu) impossible for a breaking storm wave to approach from a significantly different direction. Breaking waves are formed by the wind and by the addition of the energy of the smaller waves that they overtake (= überholen). If a wave moved across a series of smaller waves it would lose all its energy in turbulence. We have many aerial views of the sea surface in the Sydney Hobart storm. If a large wave had moved across the smaller waves we would see a white streak (= Streifen), running across all the other streaks. There is no such a streak. What actually happens is that if the boat is lying at some angle to the prevailing sea as the breaking wave approaches, the action of this wave yaws (= gieren, vom Kurs abkommen) the boat until it is abeam (= breitseits zu den Wellen).

This yawing motion is not observed by the skipper and he thinks the wave direction has changed, whereas it is the boat that has moved. It is true, however, that the waves that caused the damage were "exceptional". …

Another optical illusion is that it is possible in a survival storm to reduce the hazard by running off before the waves and, by skillful seamanship, to out maneuver a dangerous wave. This is a particularly unfortunate choice. The waves are moving faster than the boat can go. A 40 ft (12 m) breaking wave will be moving at a speed of approximate 23 knots (42,5 km). The breaking wave is completely random (= zufällig). Furthermore, by far the most important concern is that, if the boat is moving through the water, the chance of being caught by the wave and surfing to a dangerously high speed is greatly augmented. …

A final misconception is the belief that a breaking wave "strikes" the boat and that the moving water in the crest does the damage. Actually, the boat is lifted by the forward face of the wave with no impact (= Zusammenprall). When it reaches the breaking crest the boat velocity is close to the wave velocity. The crest water is aerated (= be-, durchlüftet) and has little damage potential. Damage to the boat is incurred when the boat is thrown ahead of the wave and impacts the green water in the trough. The leeward side and the deck are struck. A careful reading of "Fastnet Force Ten" and "Fatal Storm" will confirm this conclusion.

I have chosen the case of the Winston Churchill in the 1998 Sydney Hobart race as an example of a worst case breaking wave. The Churchill was a classic wooden sloop of 25 tons displacement and 55 ft (16.7 m) LOA. Of the experienced crew of 9, two perished in the accident. …

"A sea came out of nowhere", said Stanley, "I could feel it from where I was in the aft coach house. It picked the boat up and rolled it down its face - 25 tons of boat- into the trough at a 45 degree angle. It was like hitting a brick wall when we hit the bottom." …

History shows that the probability of a yacht being capsized and damaged by a large breaking wave is strongly influenced by the displacement of the vessel. Yachts under 35 ft. have a poor history while yachts over 50 ft are rarely capsized and damaged. The nature and extent of the damage incurred by the Churchill is also most unusual. The vessel was designed by Sparkman and Stevens and was maintained to the highest standard. Yet the heavy timber bulwark was shattered, the planking gone and the ribs exposed.

There is no question of the fact that the leeward bow of the boat was driven into solid green water at an extremely high velocity, far higher than would be expected in a simple contact with a breaking wave. We now have a technical understanding of how such a destructive force can be generated. …

The Loss of the "Winston Churchill"

We now have enough information that we can apply the same analyses to the Winston Churchill.

As the Churchill slid down the face of the wave on its side, there would be very little friction or drag, because the water supporting the boat would be moving at the same speed and would accelerate with the boat. With no friction the boat could reach a speed of 67 mph (108 km/h) by the time it reached the trough. If we assume only half of this speed increase (= Steigerung), the boat would strike the green water in the trough at over 50 mph (80.45 km/h).

This velocity is equivalent to a free fall from over 70 ft (21.5 m). This clearly explains the sequence of events which destroyed the Churchill. A boat striking green water at this speed can incur a force of over 200,000 lbs (~ 90 t).

Fig . 4 shows the Churchill in the trough of a 45 ft (13,7 m) breaking wave. A series drogue has been deployed and the boat is dead in the water. The wave face is moving toward the boat at over 30 mph (48.3 km/h). The drogue device consists of 164 … cones concentric with the towline (die Leine geht mittig durch die tütenähnlichen Zylinder hindurch) and attached to 348 ft (106 m) of double braided (= geflochten) nylon line … A 30 lb. (13.6 kg) weight, usually a length of chain is attached to the end.

Fig. 5 shows the boat as it reaches the wave face. A heavy boat such as the Churchill is not thrown ahead of the wave but is caught up by the wave and brought up to wave speed. The loads on the boat when struck by the crest are not high enough to cause damage. The boat rides up the face and is near wave speed when struck by the moving water at the crest. In the more than 15 years that the drogue has been at sea, no boat has ever been damaged. In particular the rudder, transom, cockpit and companionway doors (= Niedergang) have all been unscathed (=unbeschädigt).

Fig. 6 shows the Churchill surfing down the face of the wave. The crest has broken and the surface water is moving with the wave. Without a drogue the boat would accelerate rapidly. However, at this point the drogue has straightened out and is reaching the peak load, approximate 25000 lbs (11,3 t) or half the displacement of the boat. The boat now decelerates and reaches the trough at a moderate velocity and with little roll or yaw. No high loads are imposed on the hull or rigging.

Fig. 7 shows the Churchill without a drogue impacting the trough at a speed of over 50 mph (80 km/h). This is why the crew reported that "It felt like we had struck another boat". 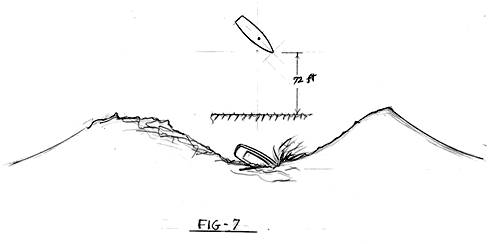 The wave characteristics discussed here and shown on these figures are taken from a computational fluid dynamics simulation (= CFD, Fachbegriff, s. unten). Although actual storm waves will have local surface variations, the energy level and dynamic behavior of large waves such as those that struck the Churchill are now well understood and predictable for engineering purposes.