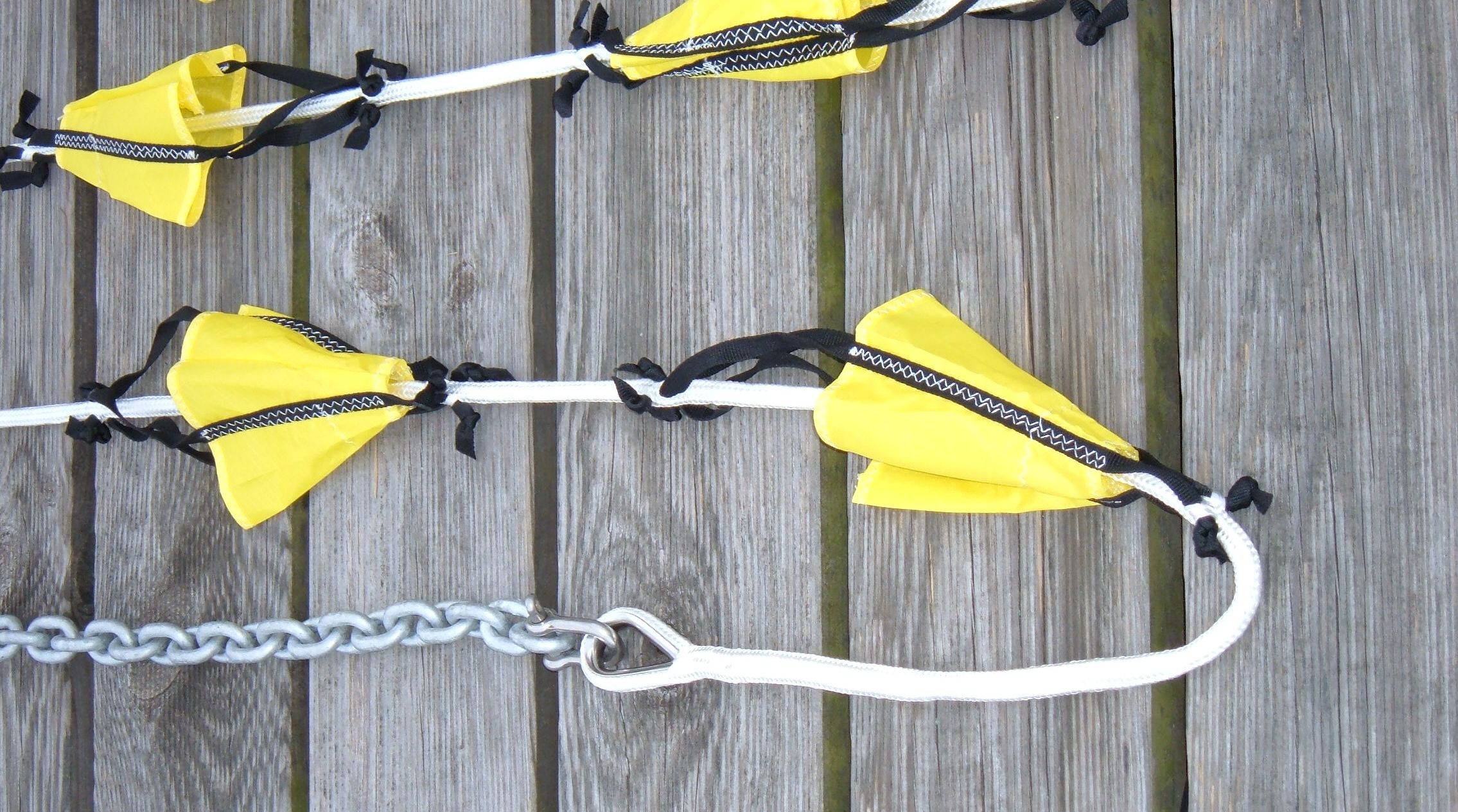 Cones of Dacron, sewn onto the drag line.

The number of the cones comply with the displacement of the yacht.
A weight is rigged at the end of the cable. The purpose is to keep the system below the surface of the water and to keep it under tension.
Between the attachments at the stern and the the dragline there is rigged a "bridle" consisting of two ropes who form a "V". 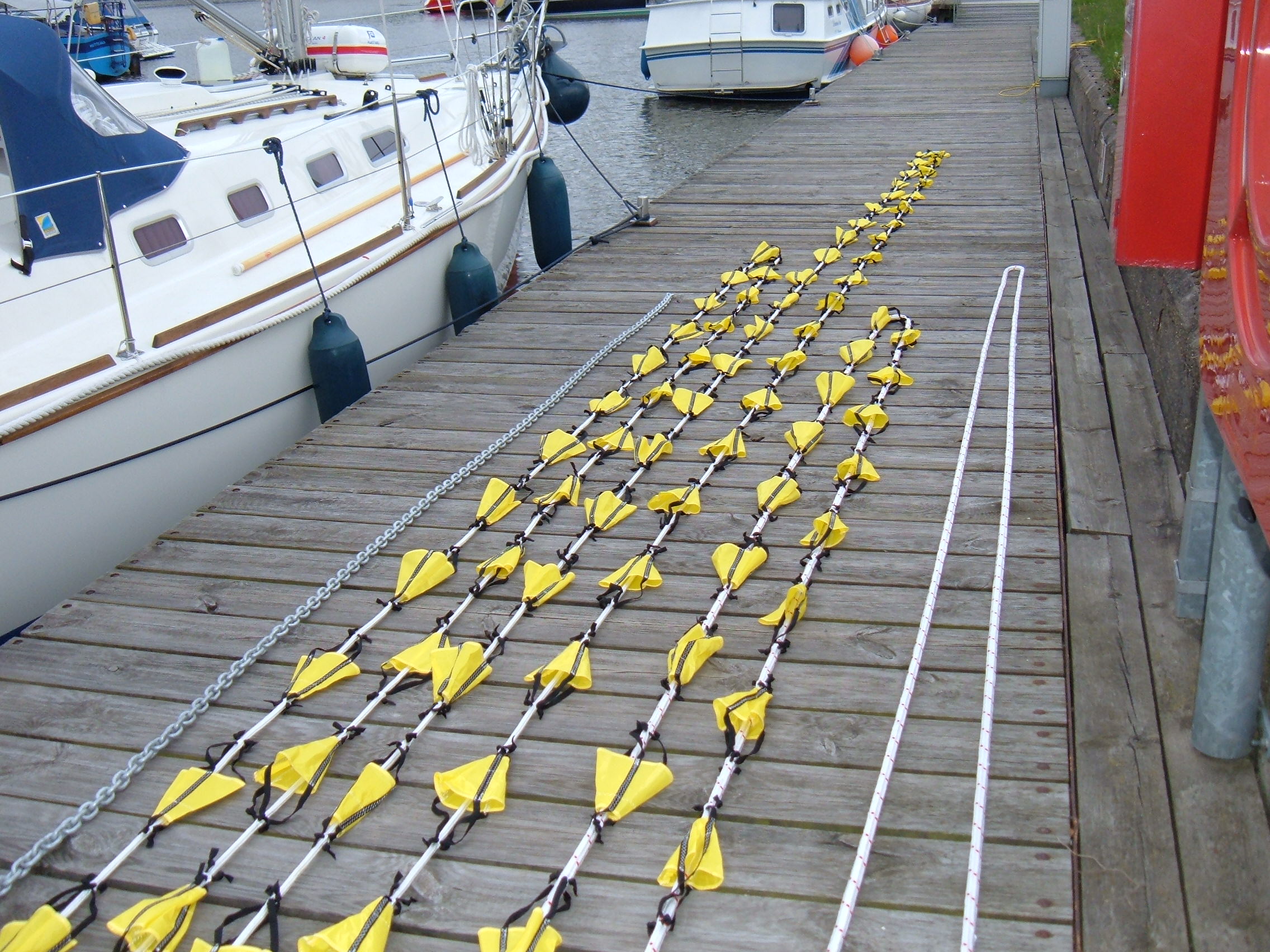 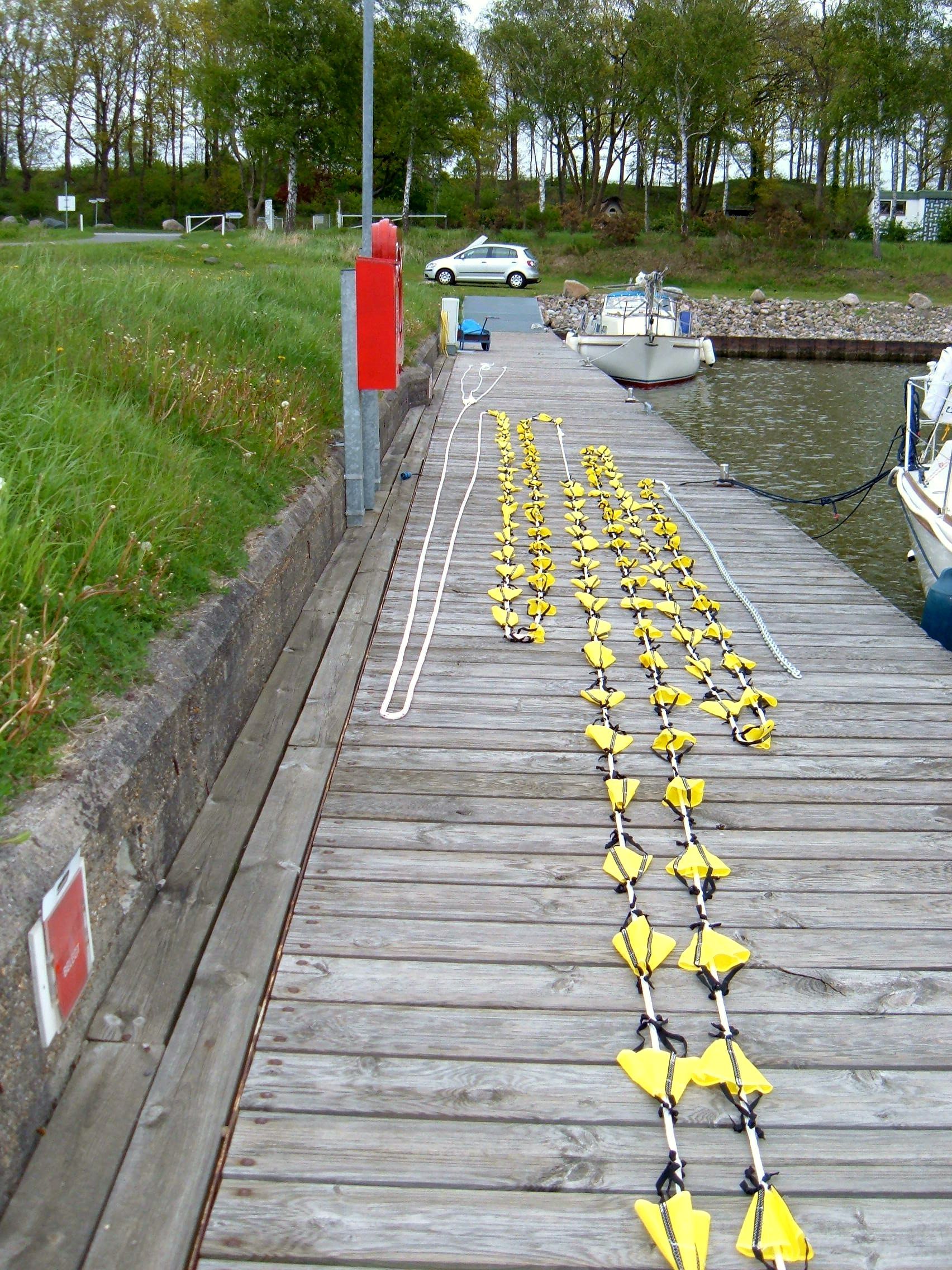 First some figures given by Jordan himself.
The forces, which a boarding breaker may exert to the yacht, are frightening:

•    The safety harnesses should withstand up to "4 g".
During the acceleration by the wave the yacht first will be straightened by the JSD, that means she is moved circularly prior to deceleration. It is hard to predict in what direction one is thrown.
Waist harness or three-point belts like those in cars would be better than to hook the lifebelt somewhere in the cabin. Even when resting in the berth one will be forced to attach oneself, if possible in different directions, may be with two lifebelts.

•    The stern of the yacht, the companionway and the walls of the cabin (next to the cockpit) should
withstand a load which matches a waterjet pressure of  "4,5 m/s".
Presumed the companionway door is 1 m2. Then a weight of 1 ton (1000 kg !) would press against  the companionway, of course against his brackets, too. Against stern and cockpit-/cabin wall as well. 2)

For owners of metal yachts things are relatively simple. Probably they don`t need to fear problems with regard to stern and cockpit/cabin wall.
Presumably one wants to replace the panels of the companionway. Best would be plates from carbon. But they are not cheap.3)
Half the price would be to bond thin carbon plates to the panels.
A bidirectional carbon fibre plate of 2 mm thickness (better 3 mm) should be enough so that it should not crack with the expected water pressure.
The carbon plate should be bonded on the plywood panel at the cabin side (!) of the companionway flush and immovable.4)
But there still will be a deflection, in the worst case to such an extent that the board will jump out of the ducts.

My friend, Dr. Ing. Ullrich Schleicher, would build a kind of “shield”, which overlapps the companionway lateral, built by marine ply, 18 mm thick, with 2 layers of glass rovings 500 gr/m2 on both sides.
The shield has to be fastened securely, because it will be accelerated with 2 g in any direction.

At the transom there would have to be welded metal rings, to which the JSD is shackled.
Ring thickness and diameter of the shackle bolt at least 15 mm (steel) for a yacht of 8 t displacement (see below).

Attachment points for the JSD

Jordan advises explicit against putting the JSD over clamps or winches; they could be pulled out of the deck. He recommends horizontal anchorages similar to chain plates. They shall  be fixed at the sides of the hull at the upper end of the transom by bolts in such a way that the end of the plate protrudes slightly astern.
The stainless steel plates are to be provided with drillings at the place, where the JSD is hooked by shackles.

David Lynn lists measures of these stainless steel plates for various sizes of yachts; he uploaded
photos, too.5)

If a yacht has a displacement of 8 t the conusses would produce a draw of ~ 6000 kp. (a yacht of 9 t would have ~ 6700 kp). This force approximately is halved because the load will be taken by two attachment points. Jordan calculates each with 70 % of the load since the draw very seldom will occur in direct extension of the ship. This means a force of 4200 kp (and 4700 kp with a displacement of 9 t).
This in turn will make necessary a long stainless steel plate of 700x70x70x10 mm.
According to Lynn it has to be attached with bolts of 10 mm in diameter. This I consider overdone.
If a shackle bolt of 20 mm in diameter (stainless steel) is enough (look next section) then 4 bolts of 10 mm each should do as well. Each additional hole weakens the hull unnecessarily.

The distance between the aft edge of the hole which should take the shackle of the JSD and the end of the stainless steel plate should be at least 12 mm according to the calculations of my friend  so that the steel doesn`t tear open; superior would be 15 mm, in stainless steel 20 mm. 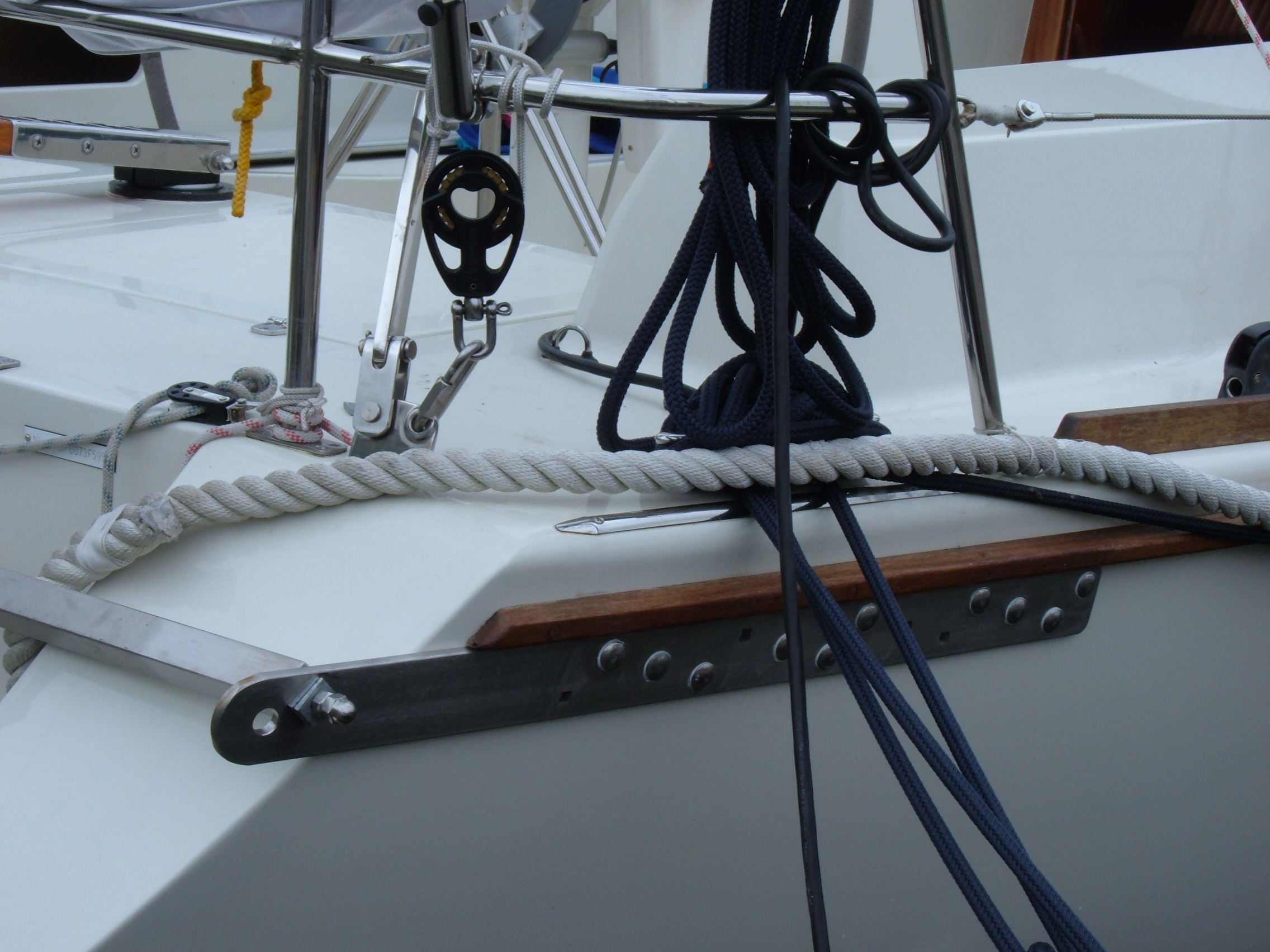 This means at the same time, that the shackle and the diameter of the shackle bolt, by which the JSD is attached, is dimensioned similar: steel 15, stainless steel 20 mm.6)

Attachment of one of the reins at the stainless steel plate.

Reinforcements of the Hull

David Lynn speaks about reinforcing the hull of a GRP-vessel by additional layers of glass fiber at the attachment points.
According to my friend that is far too little.
With my own yacht, a woodchore-epoxy-boat (i.e. a yacht whose inner layer of the sandwich construction is made from wood), he first recommends inside of the hull a plate of plywood (18 mm) significantly larger than the stripe of stainless steel outside. The plywood has to be joined to the inner side of the hull as tight as possible: epoxy filler.
Second and particularly important is a massive counter plate in addition (stainless steel, 6 mm) measuring the same like the plate outside.

The hull of a GRP-yacht, whose inner layer is made from foam, will be dented, if forces act punctually.
Therefore I would support the area by marine plywood at the place where outside the stainless steel strip will be attached. For this purpose the inner shell has to be sawed open and the foam removed. A tight fit can be obtained using epoxy filler. The reinforced area has to be laminated  with rovings subsequently.
Only now it is possible to attach the 18 mm plywood panel mentioned above plus the stainless steel plate.
It is highly recommendable to consult an expert. 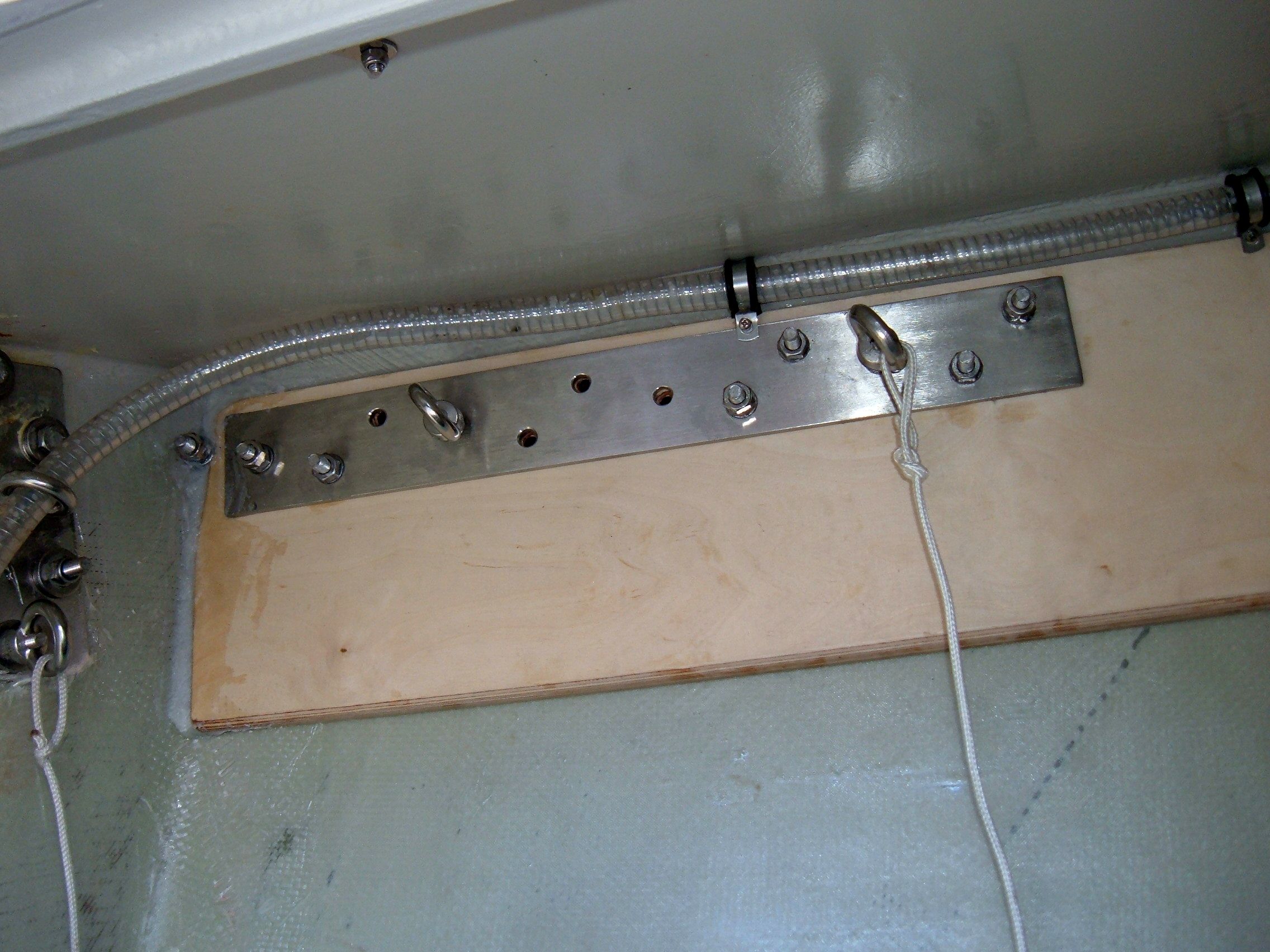 Plywood (marine ply) with counter plate, inside of the hull.

Furthermore in his opinion it has to be checked whether the bracings of the stern would be strong enough. In my example (drawing force of 4200 kp) there is a lateral load of ~ 1450 kp (at an angle of drag of 20o).
A square tube as a support, made from stainless steel, fitted exactly between the stainless steel attachment plates and as close as possible at the attachment point for the JSD, would improves the construction significantly.7) 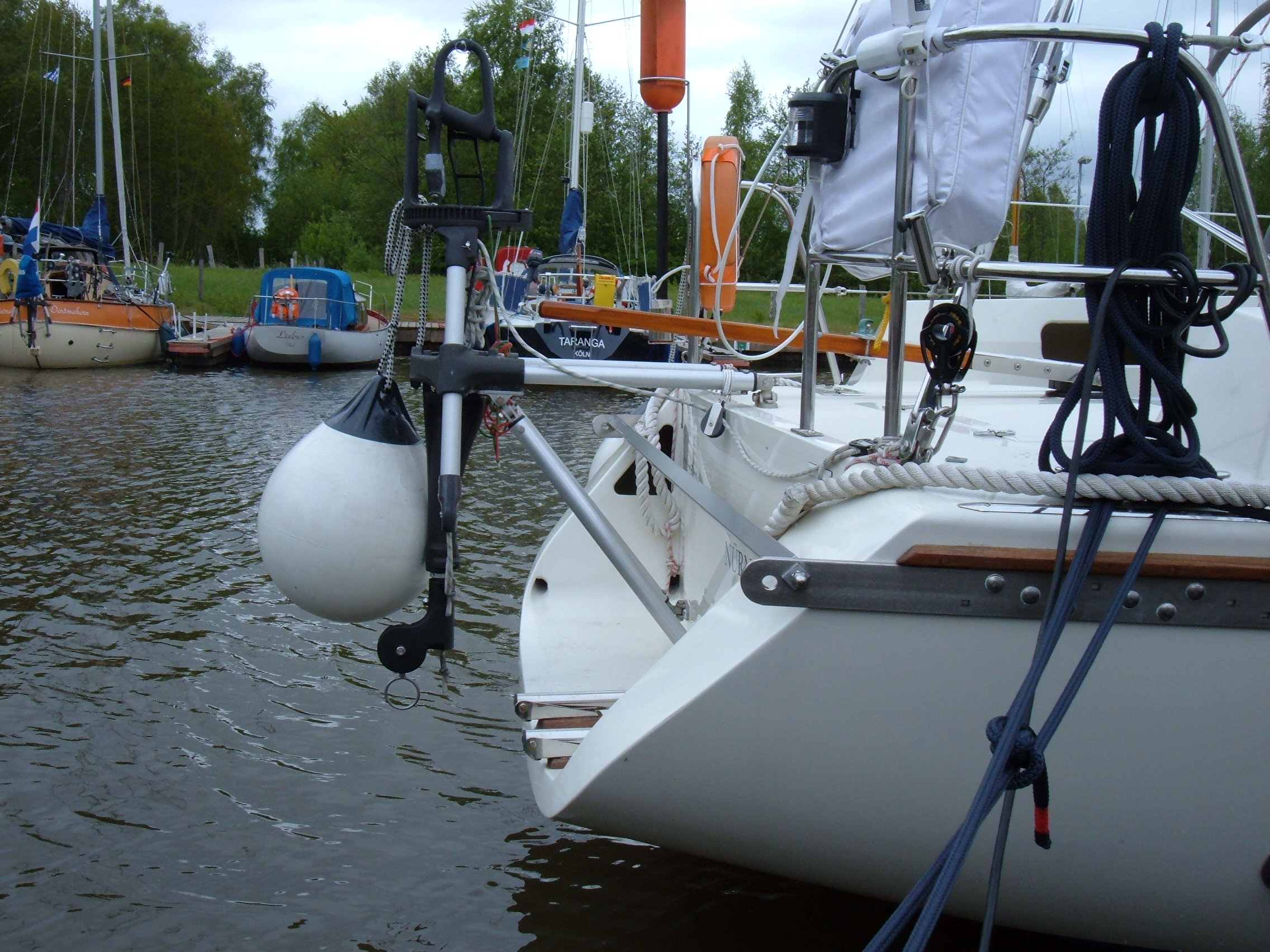 Square tube between the attachment plates.8
Don`t confuse with the (round) support tubes of the Aries self steering.

It seems to be relatively easy to reinforce the stern with rovings. Admittedly I can`t say, how many layers will be necessary at a waterpressure of 1000 kg/m2.
Maybe you opt for additional supporting walls lengthwise (… which should be supported for their part). 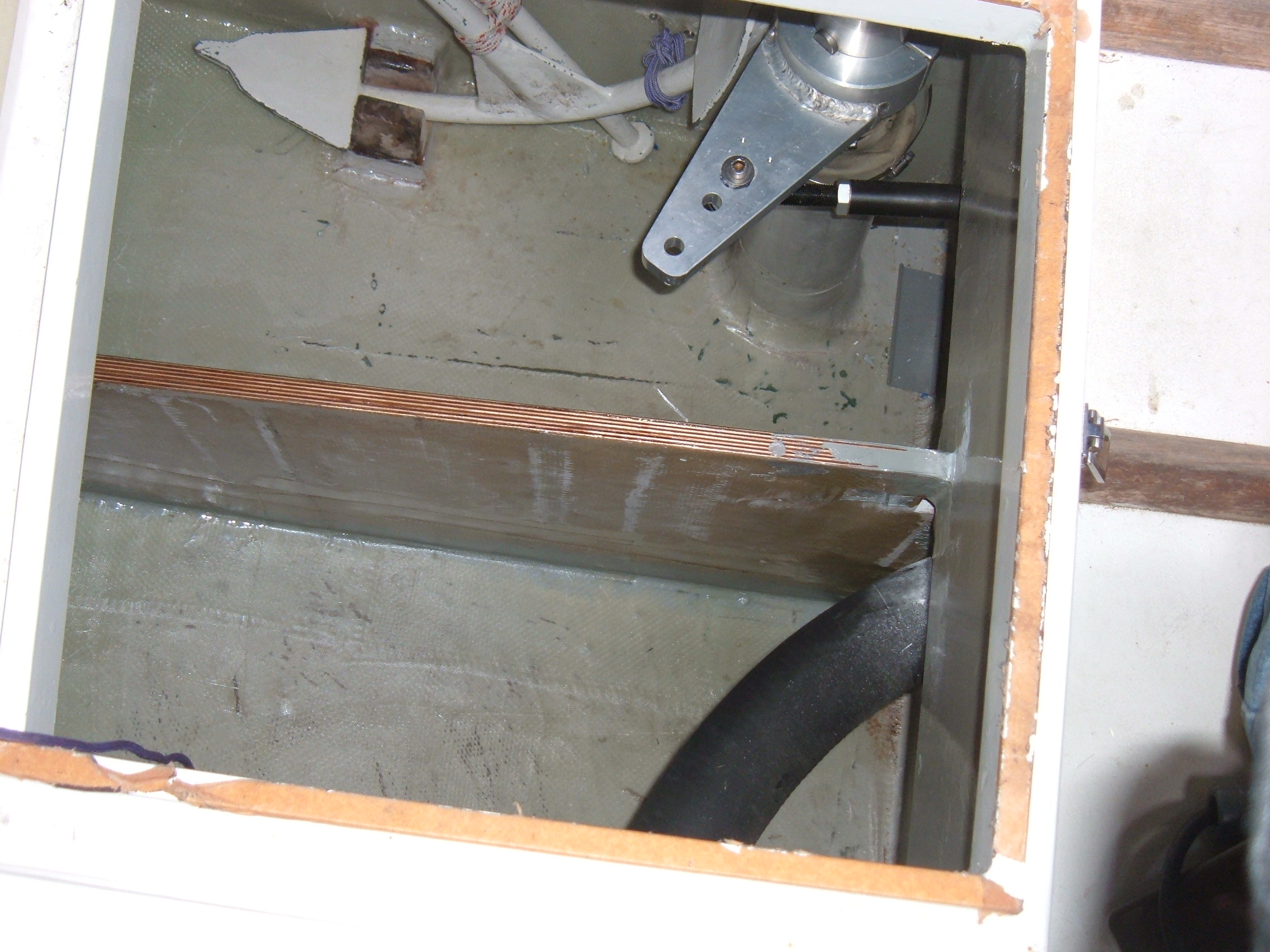 View from above into one of the lockers: supporting-wall in longitudinal direction of the vessel

Now the dilemma begins: The hulls of modern yachts are designed in such a way, that they are self-supporting. The classic longitudinal reinforcements, to which the supporting-walls would have to be linked, are lacking. Really a problem!

The same applies to the …
Cockpit – cabin - wall
It should be reinforced at any rate.

On my own yacht I did it by marine ply of 18 mm in combination with 2 layers of glass rovings 500 gr/m2.
But I am not sure whether the supportment of the cockpit-cabin-wall itself withstands. 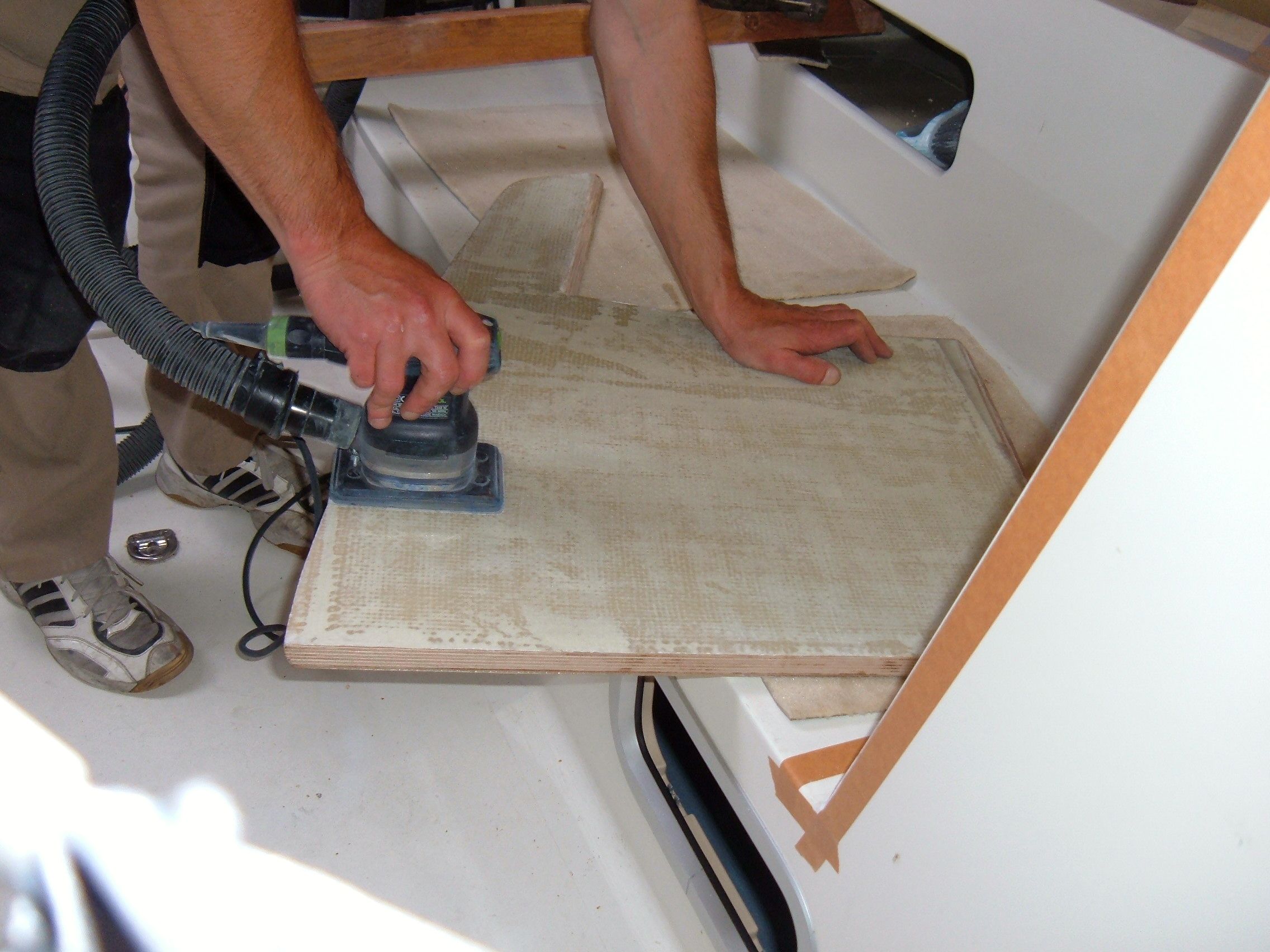 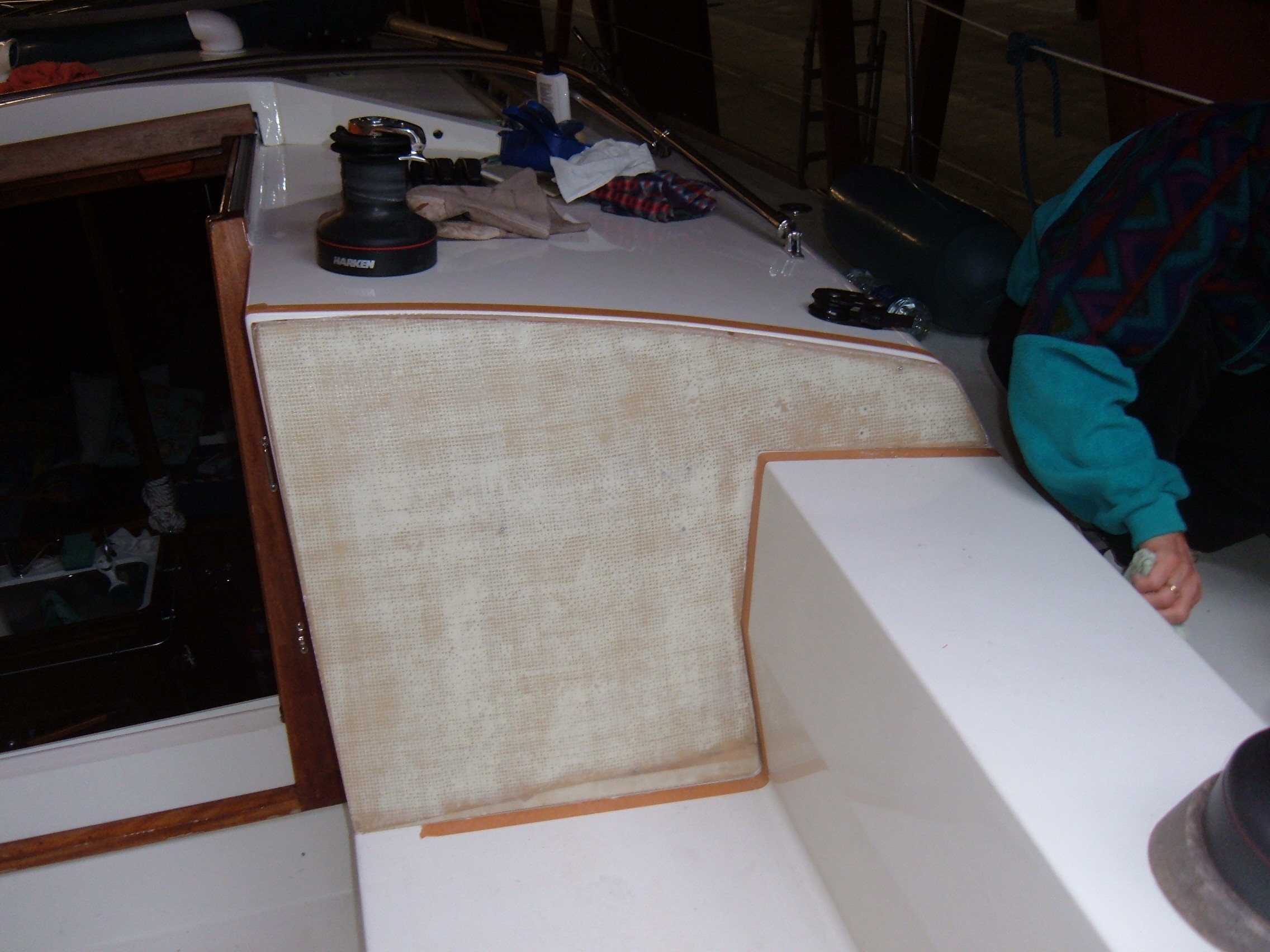 Reinforcement of the cockpit-cabin-wall. Subsequently it has been puttied with filler.

A reinforced companionway door would be bent through by the water pressure. Thus there results a force, which pushes the walls outward. This process might be compared with the mode of action of a wedge.
One does not feel good with this solution, especially with GRP- or wood constructions. Therefor the above mentioned shield is reasonable again.
On my yacht I divided it horizontally in two. The lower section will be fixed at the beginning of a serious
sailing voyage, the upper part only if needed. 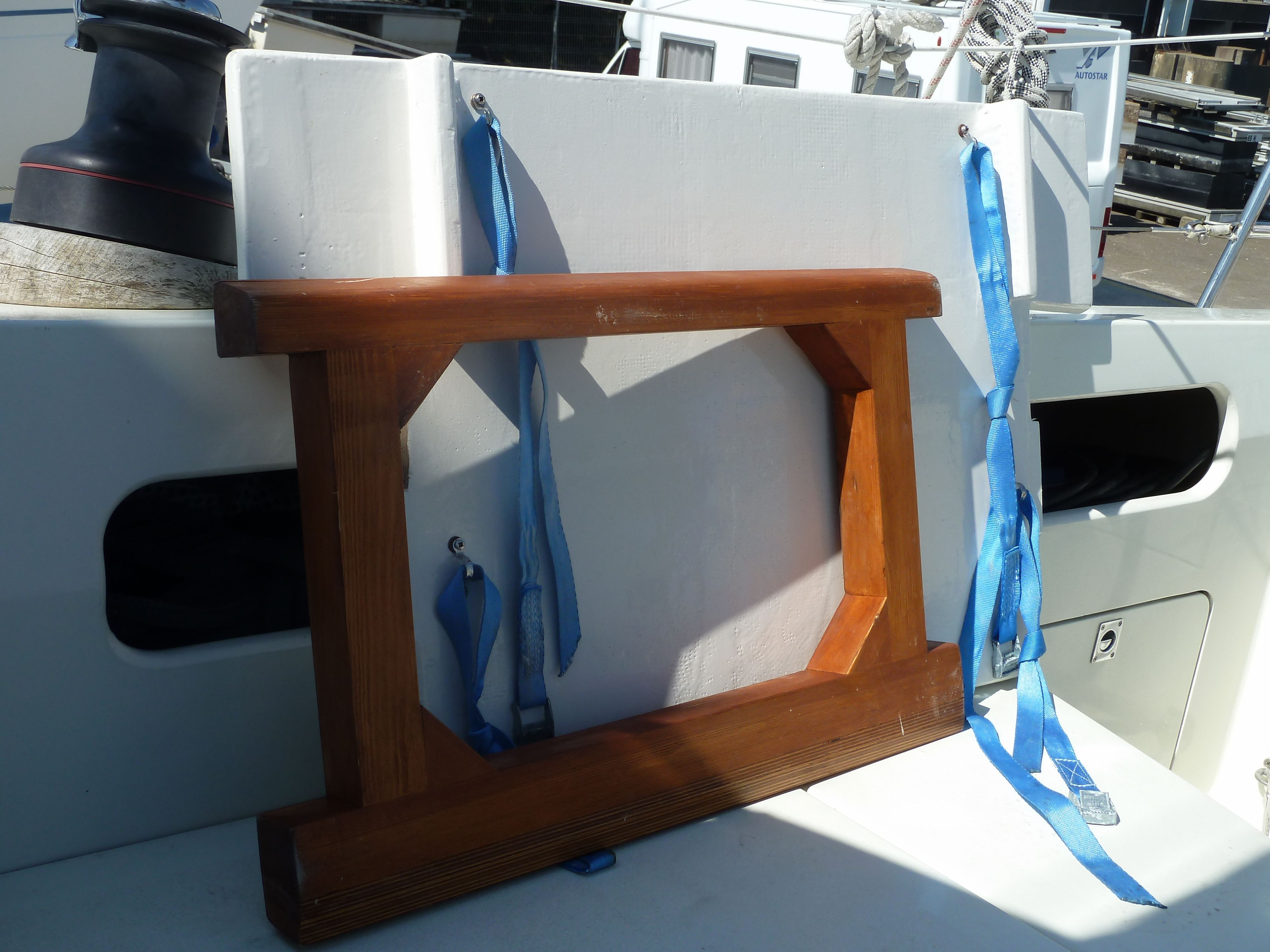 The lower part of the shield and his support (abutment). 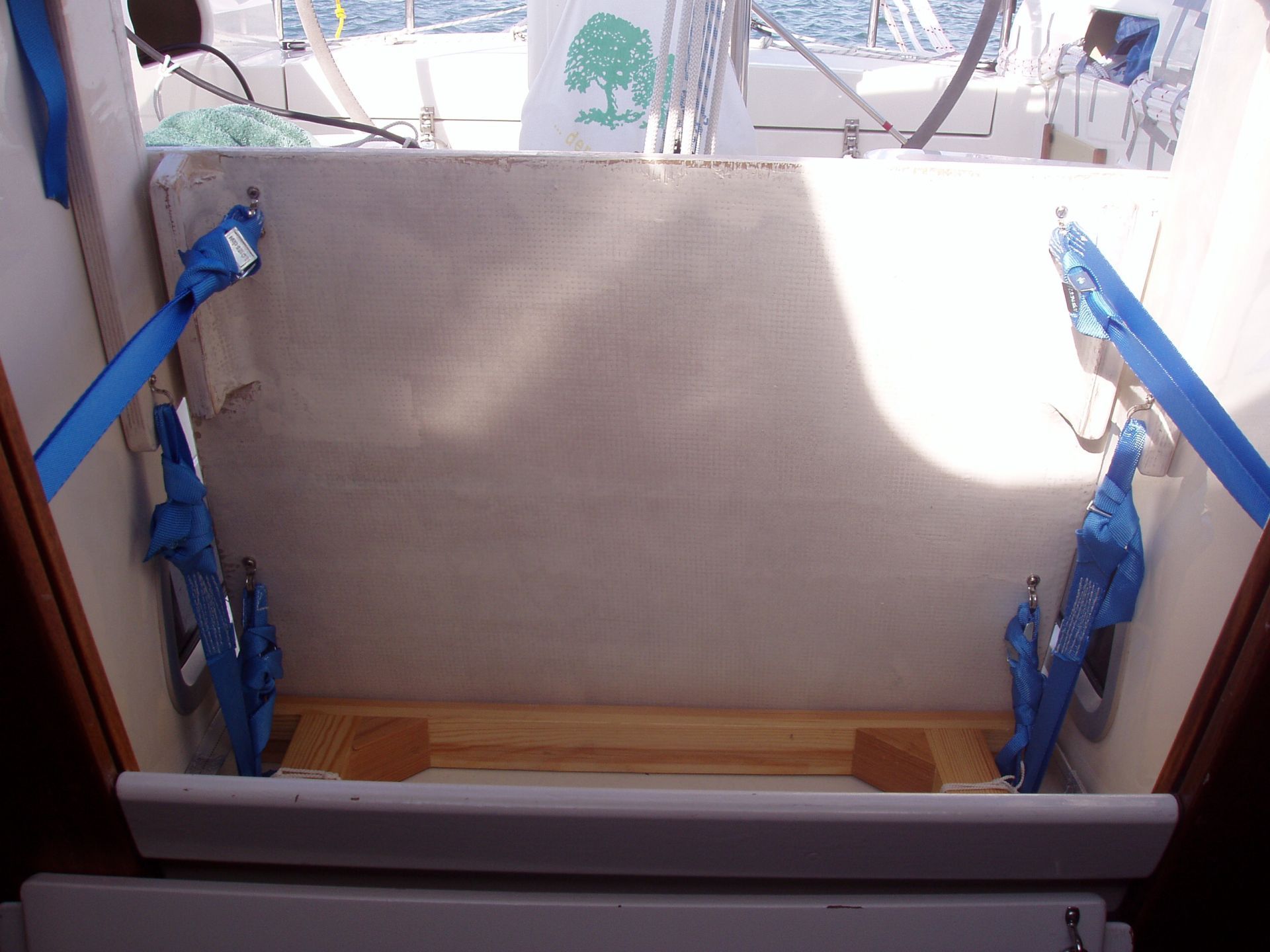 Of course the installed part of the shield is somewhat inconvenient. But you get used to it very fast. It is advantageous that there is formed a small space between companionway-door and shield, where you temporary may put halyards and ropes, i. g. when reefing. Furthermore you get a safe, protected position while working at the roof winches. 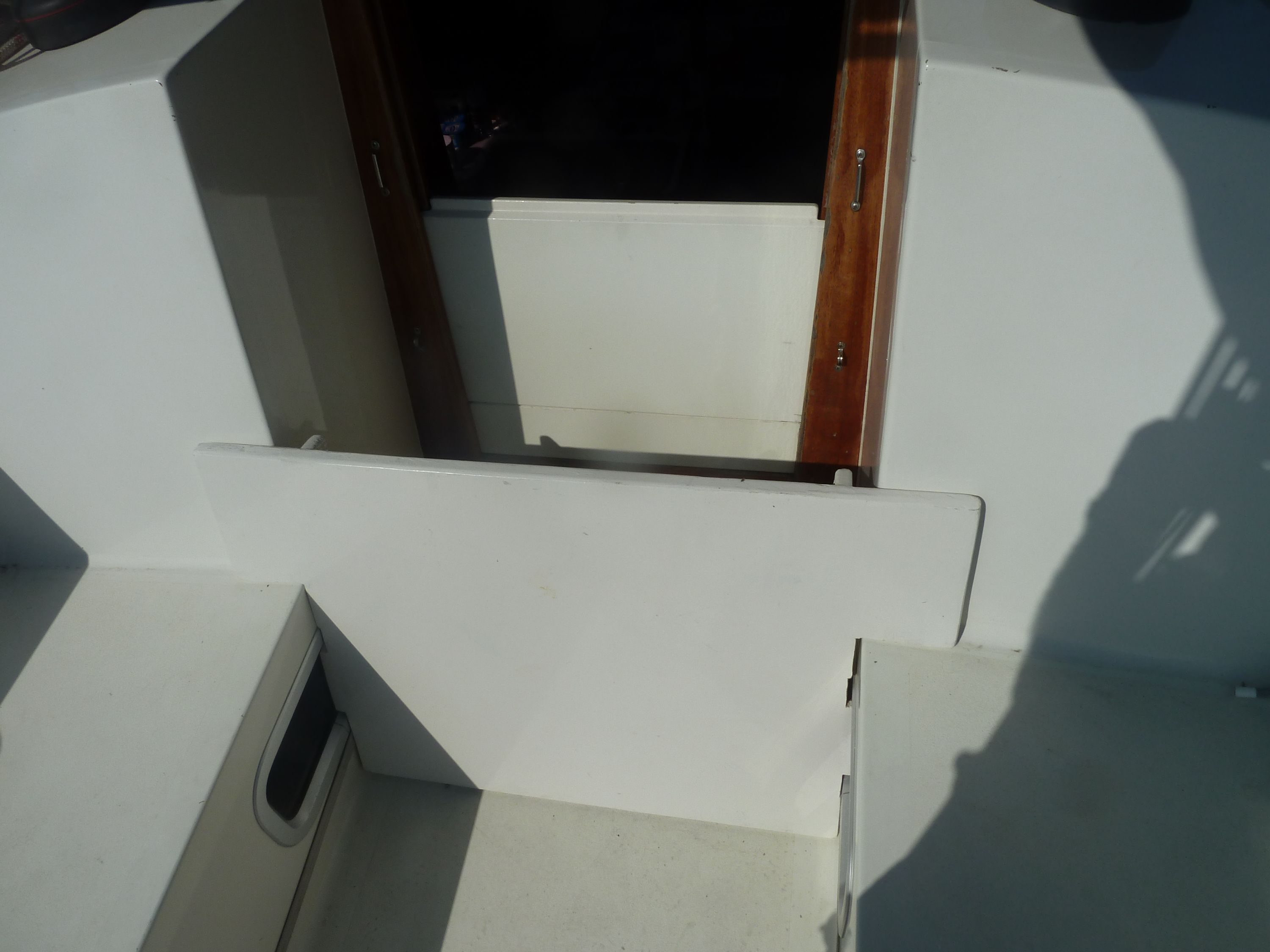 The upper part of the shield is positioned. This would comply with the worst case scenario. 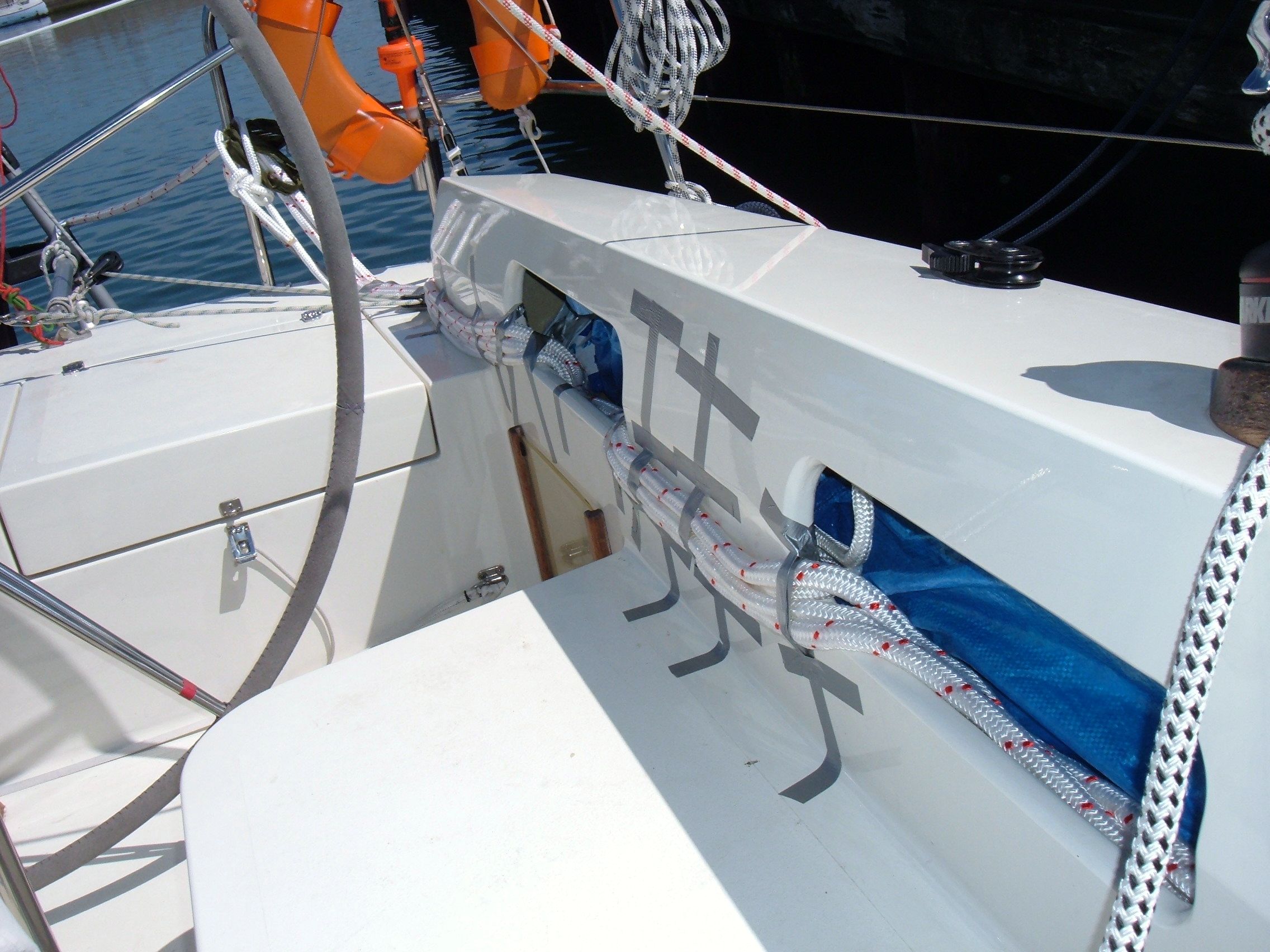 The JSD is clear for action. The weight (chain) is located in the aft sponson. In emergency it would be thrown overboard astern. In this case the whole JSD would be trailed and could unfold.

Inside the yacht
… the crew should have the possibility to hook themselves: fixed eyelets, life-lines, 3-point-belts ...

The dry figures given by Jordan only convey a weak picture of that what happens to a ship which got into a breaking sea.
Nevertheless a yacht which not has been upgraded is better under way under Jordan drogue than whithout.

But when the yacht has been reinforced appropriate (or she has been designed in this way from the beginning) she will have a real chance with the JSD even under extreme conditions.
- - - - -

It is possible to work plates of carbon reasonably normal: sawing, drilling, bonding; the cutted edges have to be sealed. Informations e. g. at www.carbon-blog.de (2010)

4)    Dipl.-Ing. Dr. Ulrich Schleicher performed the calculations for it.
The following parameters have been assumed:
-     The pressure does not developp abruptly; area: 1 m2; marine ply: 8 mm;
zero line of compression-tension: on the border beween two materials
-    Tensile strength of the bidirectional glass fabric: 1300 N/mm2
(according to  www.carbon-blog.de);
-    Security surcharge: 100 % .

The carbon-composite-door approximately would reach 830 N/mm2. But carbon and carbon may not be the same. One should request a confirmation of the tensile strength by the manufacturer.
This and all the following constructive proposals are from Dr. Ulrich Schleicher.

8)    Lateral force = 4200 kp x sin 20 (angle of drag) = 1436 kp; at 30o it would be 2100 kp.
The square tube prevents deformation of the lateral mounting plates (outside at the hull) namely that they don`t bend inward, additional the tractive forces always are spread over both plates.

I researched to the best of my knowledge and belief. We calculated and I translated as good as possible. But we don`t assume liability
The explanatory photos have been taken at our yacht "SUMMERTIME".
Dr. Lampalzer, Feb. 2018